Disclosure: This is a professional review blog. Bear in mind that some of the links in this post are affiliate links and if you go through them to make a purchase I will earn a commission. Keep in mind that I link these companies and their products because of their quality and not because of the commission I receive from your purchases. All of the products are tested thoroughly and high grades are received only by the best ones. I am an independent blogger and the reviews are done based on my own opinions..

Venezuela and Peru are two South American soccer teams that have met 33 times in their history, with a positive record for Peru against Venezuela, with a large advantage for Peru with twenty games won against eight of Venezuela, where Peru has won seven wins consecutive between 1938 and 1989, the remaining five matches ended tied.

In the Copa América according to statistics Venezuela and Peru have faced a total of eight occasions with a favorable balance for the Peruvian team that has defeated the Venezuelan national team in 5 opportunities, drew 2 matches and lost one.

The last time the Inca team fell to the Vinotinto team was in the Copa América 2007 with a result of 2 goals by zero.

The first time in history that the Venezuelan and Peruvian soccer team faced each other was in the Bolivarian Games of 1938, where the Peruvian team won Venezuela 2 goals to 1, this match was held at the stadium of the University City of Bogotá – Colombia on August 17, 1938. This was the first victory for Peru against Venezuela and in turn the first defeat of Venezuela against Peru.

The first victory that the Venezuelan team won against the Peruvian national team was in a friendly game held on June 25, 1989, with a result of Venezuela 3 – Peru 1.

The biggest win of the Peruvian team against the Venezuelan team was 5 goals to 1, this happened in the Copa America on July 12, 1991.

With the meeting between Venezuela and Peru held at the Maturín Monumental Stadium – Venezuela on March 23, 2017 with a 2-goal draw the spectacular comeback of the Incas begins to reach the 2018 World Cup in Russia. 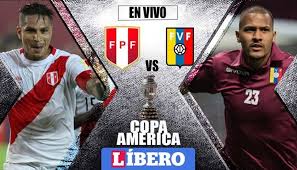 His debut came in the South American Championship where he was the host on November 1, 1927, before the Uruguay team, this match was lost by Peru 4-0 and won against Bolivia 3-2 and was defeated by Argentina 5 to 1, in this tournament ranked third.

In 1930 Peru was invited to participate in the first soccer world cup which was held in Uruguay, the two-color group C joined together with the selections of Romania and Uruguay being defeated in the two games I played, 1-0 against the host and 3-1 against Romania, this was the meeting in which Peru scored their first goal in the history of the World Cups, scored by Luis de Sousa in the 75th minute.

In the 1970 World Cup Mexico, he managed to qualify for the quarterfinals, this being his best participation in a world cup and in Argentina 1978 he managed to reach the second phase.

At the regional level he has been champion of the Copa América 2 times, beating Uruguay in 1939 and defeating Colombia in the 1975 edition, in Chile 2015 he won the third place in an Copa América for the eighth time. In the Copa América Brasil 2019, Peru managed to reach the final and faced the host team (Brazil) which was champion in this contest, this match was held at the Maracaná Stadium on July 7, 2019, with final score from Brazil 3- Peru 1, thus closing a successful campaign in the competition.

His player with the most goals scored is Paolo Guerrero with 39 goals and the one with the most participation is Roberto Palacios with 128 games played.

The football team of Venezuela, also known as La Vino Tinto, has been an active member of FIFA since 1952 and CONMEBOL since 1953, being the last of the ten South American confederations to form and join. His debut originated on February 12, 1938 before the selection of Panama in the IV Pan American and Caribbean Games, this match ended 3-1 in favor of Panama. It is the only CONMEBOL team that has not yet qualified for a Soccer World Cup and is also, together with Ecuador, one of the teams that has not won a Copa América. It has been considered one of the weakest selections in the continental confederation. However, at the end of the 20th century, a very important football growth began in Venezuela that has become a considerable improvement in its competitiveness and the quality of its game. His greatest achievement at the regional level has been to obtain the gold medal at the Central American and Caribbean Games in 1982 and fourth place in the 2011 Copa América.

Venezuela debuted in the qualifiers during the Conmebol qualification for the 1966 Soccer World Cup, forming Group 1 together with Peru and Uruguay. His first game was on May 16, 1965 in the National Stadium of Lima against the selection of Peru with a result of 3-1 favor of Peru.

In 1967 I debuted in the Copa América that took place in Uruguay that year.

FIFA made the decision to separate Venezuela from the contest to the World Cup qualifiers to be held in Germany in 1974 due to internal disputes between the Venezuelan Football Federation and the Professional Football League of Venezuela. However, he played the next edition of the 1975 Copa América where he would get his worst defeat ever by losing 11-0 to Argentina.

In 1977 the selection participated in the qualifiers to the World Cup in Argentina 1978 obtaining only one point to tie with Uruguay.

In 2001 Venezuela would start the qualifiers with a view to the 2002 Korea World Cup, with three consecutive defeats, then beat Bolivia for the third time in qualifiers, but the historical results began on August 14, 2001 when Uruguay defeated Uruguay for the first time in its history 2-0, on the next day he beat Chile 2-0 this was his first victory as a World Cup qualifier in his history, then they beat Peru 3-0, and on his penultimate date he won 3 goals for 1 against Paraguay, the winning streak ended Brazil winning 3-1 on the last day. Venezuela finished in ninth place with 16 points resulting from 5 wins and a draw, it was the first time that he would not finish last in qualifying rounds. In the Copa América Perú 2004 it was eliminated in the first phase of the tournament.

In 2007 he organized for the first time a Copa América where he reached the quarterfinals. With Cesar Farías as technical director in 18 games they got 22 points surpassing Peru and Bolivia in the standings. They also beat Brazil 2-0 for the first time in a friendly match. In the Copa América 2011 they achieved a historic fourth place. They would also get their first win against Argentina after beating it 1-0 in a qualifying match.

The Venezuelan player with the most appearances is Juan Arango with 127 games and also has the record of the most goals scored in the qualifiers with 22 goals, Salomón Rondón ranks as the top scorer with 24 scores between Copa América, qualifiers and friendlies. José Luis Dolguetta is the only Venezuelan to be the top scorer in a Copa América with 4 goals and he is also the top scorer of the national team in this tournament with 6 goals.

Venezuela until July 2019 is ranked No. 26 in the FIFA world rankings.